On Wednesday April 6th, members of the Riverside Township Police Department gathered at Cafe Madison to honor and celebrate achievements made by Officers during the previous two years. Normally, Officers gather once a year for the annual dinner, however, they were unable to in 2020 due to the pandemic. 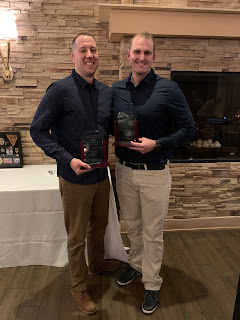 Detective Scott Snow and Patrolman Michael Hynes were presented with the Riverside Police Department’s Officer of the Year Award for 2020 and 2021 respectively. The Officer of the Year Award is presented to Officers who exceed the duty requirements expected and provide exceptional service throughout the year.
During 2020, Det Snow handled numerous domestic violence investigations, including a complicated investigation that led to the arrest of a high ranking law enforcement official. Det Snow also investigated, located, and arrested a suspect who was responsible for numerous car burglaries over the course of several weeks. In addition, Det Snow investigated several cases related to his role as the Humane Law Enforcement Officer.

Ptl Hynes excelled during his first full year with the Riverside Police Department. He was a leader by example through his proactive policing style, conducting hundreds of interactions with the public. His determination and tenacity to locate criminal activity was second to none during 2021 and allowed for a contagious work ethic and positive attitude to be brought each shift.

Other awards presented were:

Congratulations to all of the Officers! Thank you for your dedicated service to the Riverside Township  Police Department and the residents of Riverside!