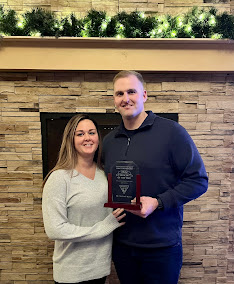 Last night members of the Riverside Township Police Department gathered for our annual awards ceremony.  Ptl. Michel Hynes was selected as OFFICER OF THE YEAR for 2022.  He was recognized for his patrol accomplishments and his dedication to community service. This is the second year in a row Ptl. Hynes was selected as Office of the Year.  He is the only two time recipient of this award since we began formally recognizing officers 16 years ago. Other award recipients were:

All of our officers and their families were also acknowledged  for their ongoing contributions to our community events.  Without the assistance of our friends and family members some of our most popular community events would not be possible.

Once again, congratulations on a job well done and thank you for your dedication to the Riverside Township Police Department and our community!