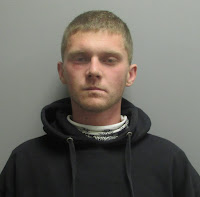 On 11/7/15 at approximately 11:45 p.m. Riverside Police conducted a motor vehicle stop on Fairview Street and arrested the operator for drunk driving.  Francis M. Hayes Jr, 21 of Delran, was taken into custody, processed for the offense and released on his own recognizance.  The vehicle was impounded for 12 hours in compliance with “John’s Law.”

The following morning a resident came to the police station to report his work vehicle had been stolen overnight.  The stolen motor vehicle was the one that Mr. Hayes Jr. had been operating when he was arrested for the drunk driving offense.

On 11/9/15 Mr. Hayes made an appearance at the Riverside Municipal Court where he was taken into custody for Theft of a Motor Vehicle.  He was lodged in Burlington County Jail in default of $5,000 bail.
Posted by Riverside Police NJ at 6:37 PM