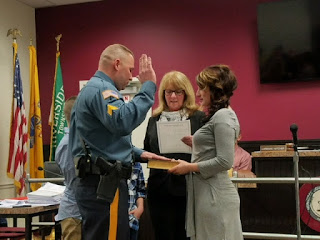 At tonight's Township meeting Detective Brandon Conard was sworn in as Sergeant as his wife held the Bible and his children stood at his side.  Sergeant Conard is a 10 year veteran of the Riverside Police Department.   In June of 2015 he was assigned to the Detective Bureau where he successfully investigated many cases.   Sergeant Conard has been the recipient of numerous commendations during his tenure including Officer of the Year, three Chief's Citations and a First Aid Award.  We wish Sgt. Conard the best as he begins his new position as a patrol supervisor!
Posted by Riverside Police NJ at 8:29 PM